Salt and pepper. Peanut butter and jelly. Sonny and Cher. Bonnie and Clyde. Middle schoolers and Juul pods. Facebook and racist relatives. These are not things I’d use to describe the Harden/Westbrook pairing... I’m thinking more like oil and water, chocolate and mint (if you like this you’re wrong), rush hour traffic and low blood pressure, Russell Westbrook and Kevin Durant, James Harden and Chris Paul. The idea of placing the two most ball-dominant, hard-headed ball hogs in the league next to each other and hoping that they don’t kill each other by the end of the season seems… naive, unintelligent. You can’t pin it all on Darryl Morey tho, his hand was forced when Harden and CP3’s deteriorated relationship became public after the season ended. Paul had to be moved, as Harden is the better player, and teams weren’t chomping at the bit to take on a 34-year old guard on a max contract, which still has three years remaining.

Morey did sign CP3 back in 2017, knowing well and good that giving a max contract to a then 32-year old point guard would mean handcuffing himself a few years down the line. But the gamble almost paid off -- the Rockets were up 3-2 in the Western Conference Finals against the Warriors in the 2018 playoffs before they blew the remaining two games, including the infamous game 7 meltdown, where they missed 27 consecutive threes in a row. Had they won one of those two games, they would have been the favorites to win the Finals against the waning Cavs. That point marked the end of the honeymoon phase and beginning of the old married couple phase for Paul and Harden. Ever since, the questionable chemistry to begin with deteriorated and the road became increasingly rugged, stony. On CP3-led possessions, Harden would meander over to a corner and stand stock-still, just completely take himself out of the play. He was visibly uninterested when he didn’t have the ball and made zero attempt to hide it or contribute in any meaningful way. The two would reportedly get heated in team huddles and after games -- Harden wanted more iso possessions, Paul wanted more ball movement, and D’Antoni couldn’t find a middle ground to keep them both happy, or at least, content. So Morey had little choice but to move the 34-year old future Hall-of-Famer and bring in another guard who would be willing to play alongside Harden.

OKC’s Sam Presti used this opportunity to move a bad contract of his own and in return, receive a replacement guard and several first-round picks. He traded Russell Westbrook to the Rockets in exchange for Paul, two future firsts, and two future pick swaps -- quite the haul for a 30-year old point guard who relies on athleticism, coming off another knee surgery. The two former Thunder teammates and recent MVPs are now reunited in Houston, and publically, the duo seem excited and eager for the reunion. And for the first few months, any sort of friction will be easily kept quiet. The two superstars know that the media is jonzin’ for an on-court spat that they could re-run on Sports Center every day. But once they find themselves a little above .500, losing some winnable, close games, sometime around All-Star break, the gloves are coming off and we’ll start to see some on-court disdain. Harden’s irritance at Westbrook’s chucked-threes, wild drives to the rim, or ill-advised post ups will turn to exasperation after a few months and it won't be long before he starts standing in the corner, completely uninterested, on Russ’ possessions too.

Best case, Harden would lead ~65% of the offensive possessions, while Russ would take the remaining ~35%. Harden’s isos and pick and roll actions are more effective and should be utilized more but Russ’s ability to continuously put pressure on the defense can allow Harden to take a few possessions off and also make the offense a little less predictable. On Russ-led possessions, Harden could essentially become a spot-up shooter, a kickout option for Russ once help defense arrives. On Harden-led possessions, I’m not sure what Westbrook would realistically be doing, though. He’s never been an off-ball slasher and only shoots the three-ball around 30 percent, so he can’t really fill the spot-up shooter role that Harden could when he’s off-ball. It’s really Russ’ way or bust and that’s how it’s been his entire career. Billy Donovan’s offensive system in OKC only perpetuated this, as the entire offense revolved around him -- the bigs would pinch on rebounds so Westbrook could grab the board and just run the defense to death. And when Russ wasn’t shooting, he’d kick out to an open shooter for the assist, which is how he was able to rack up all those triple-doubles. In Houston, though, he’ll be option B, a role he hasn’t been in since KD was top dog in OKC. And once a type-A guy like Russ gets a taste of that kind of autocracy, it’s near impossible to reign him back in… that idealized 65/35 split might be wishful thinking.

Defensively, these superstars together create the worst backcourt defense in the league. Harden’s embarrassingly lazy defense has been well documented and mocked extensively (deservingly), but Westbrook’s poor defensive effort has largely gone under the radar, likely because of his relentless offensive motor on the other end. But if you watch him, his defensive instincts aren’t great, as he’ll sell out for ill-advised steals, blocks, or closeouts, giving up easy opportunities several times a game. And while Harden gets shit for his defensive laziness and absent-mindedness, Westbrook is just as bad -- he dies on every screen, stays back on fast breaks, and is prone to losing his man off-ball. CP3 lost a half-step on the defensive end the past couple seasons, but he was still a tough matchup for a lot of guards. He’s smart, physical, and pesky, and you know it killed him to watch Harden not give a shit on that side of the ball every night. Losing that defensive motor and replacing him with an offensive superstar who has zero interest in playing defense is gonna be worse for Houston than people realize.

D’Antoni’s best bet is gonna be to stagger the two superstars as much as possible. When they’re on the floor together, they’ll both want to iso and neither of them will be willing to move off-ball to help the other one out. And like I said, defensively, they’ll be a nightmare together. But if you sit Westbrook after a few minutes and bring him back in when Harden rests at the top of the second, he can run his version of the Harden offense with the second-unit. It won’t be quite as potent, but at least stylistically, it would fit the same -- you’d have shooters surrounding the iso for a kickout once help comes to stop the drive.

End of game situations will be interesting to see. In theory, you have two offensive powerhouses that should be able to overwhelm most defenses. In reality, I’m not sold on the efficacy -- both guys are gonna want to close and lead the final possessions; they’ll either go way out of their way to let the other close or they’ll both be fighting for the ball to take the last shot. I think D’Antoni would be wise to just say upfront: “Harden will be our number one option in crunch-time.” Russ won’t want to hear that, but it would at least set the precedent from the get-go and construct a much needed pecking order.

Aside from the Harden/Westbrook pairing, guys like Clint Capela, Eric Gordon, PJ Tucker, and Austin Rivers will be back this year, filling the complementary roles on both sides of the floor. Capela is the perfect pick and roll big in today’s game; his 6’11, 250lb frame allows him to set some monster screens and roll hard for easy feeds for the ball handler, as well as protect the rim at the other end. Gordon is a spot up shooter with seemingly infinite range, who’s also an underrated defender in his own right. PJ can switch on pretty much any screen action, allowing D’Antoni to use him as a multi-positional defender who can really anchor the defense. And Rivers can give the Rockets some solid second-unit scoring and defense as well, seems to fit well in Houston’s system. I think Morey’s put together a real solid complementary unit to surround Harden and Westbrook, they’ll allow the two to run their isos and be ready when they get their touches.

But after the second-tier guys, D’Antoni’s options are really limited and he’ll have to look to Daniel House, Tyson Chandler, Gerald Green, Isaiah Hartenstein, players who don’t provide a lot of intrigue. Harden will have to log another 36+ minutes per game season and at 30 years old, with that many minutes under his belt, D’Antoni would surely love to start reeling back the minutes a bit -- he just doesn’t have that luxury with the current roster.

The Rockets’ kryptonite has been eliminated, thanks to injury and free agency, but that doesn’t mean their road to the Finals got any easier. While the Warriors won’t be a legitimate threat, the Lakers and Clippers will. LeBron & AD and Kawhi & Paul Goerge are more dangerous duos than Harden and Russ and the LA teams are better built for postseason play. And they’ll still have to deal with the Nuggets, Blazers, Jazz, and Spurs along with some younger, hungrier teams in the Pelicans, Grizzlies, and Kings in the wild West. The acquisition of Westbrook and shedding of Chris Paul made the Rockets younger and less ornery but I’m not sure it made them any better. And in a conference that features names like LeBron, AD, Kawhi, George, Jokic, Lillard, Steph, Zion, and Doncic, Harden and Westbrook will have no choice but to learn to coexist, else they’ll be prone to another second-round exit and more speculation surrounding the realistic potential of their bearded superstar. 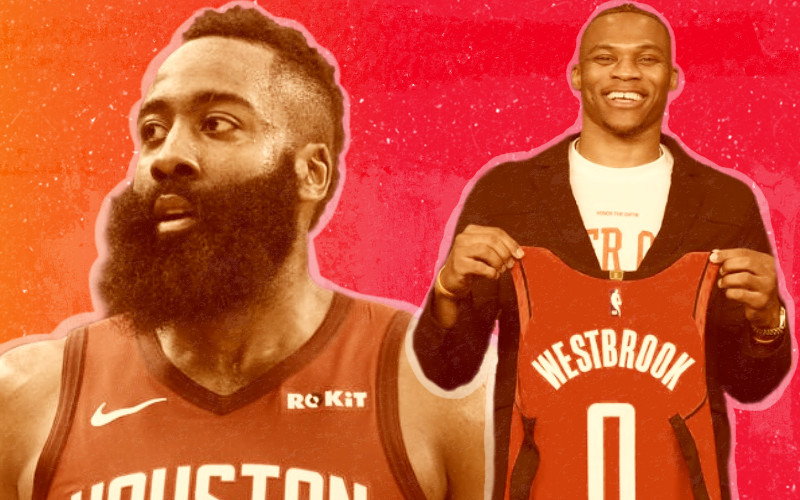