In today’s NBA, if you’re a guard you have to be able to shoot. If you can’t at least hit the three ball at a league-average clip, you’ll find yourself marginalized pretty quickly. Look at guys like Iman Shumpert, Ricky Rubio, or even DeMar DeRozan. None can shoot the three very well, yet they all bring other things to the table that make them interesting. Shumpert’s a real good on-ball defender, Rubio is a pass-first point guard who can run the offense and be a pesky defender on the other side, and DeRozan can get to the rim and hit the midrange as good as anyone and has a career 20 points per game average. But interesting only gets you so far in this league, and all three of these guys have been subject to heavy criticism and at various points, limited minutes -- in large part, because they can’t stretch the floor.

Michael Jordan, the greatest player of all time, and maybe the greatest athlete of all time, could do it all. Relentless scorer, elite on-ball defender, underrated playmaker, athletic, tough, possessed the greatest motor in the history of American sport… the only area of his game that wasn’t elite was his outside shooting. But back in the 70s, 80s and 90s, backcourt players didn’t need to be elite shooters to be great. Isiah Thomas, Magic Johnson, Dr. J, Gary Payton, Clyde Drexler, George Gervin, Alex English -- all Hall of Famers who shot the three at under 32%, well below today’s league-average. Today, everyone can shoot, even bigs -- and if you can’t, your days in the league are numbered. Once your athleticism goes with age, you better have a jumpshot to fall back on, which is why guys like Westbrook, DeRozan, and Jimmy Butler, athletic stars entering the backside of their careers, make teams think twice about throwing them huge contracts, given their age and skill sets.

To me, MJ is the GOAT, no question. Six for six in the Finals with six Final MVP awards, five-time regular season MVP, 14-time All-Star, 11-time All-NBA, 10-time scoring champ, DPOY, nine-time All-Defensive, first-ballot Hall-of-Famer… but not having a jumper in today’s league raises some legitimate questions on how successful a player can be, even if that player is MJ.

Some say if you were to transplant MJ into today’s league, he’d look a lot like DeMar DeRozan or Jimmy Butler -- strong, athletic guards, who default to mid-range isolation possessions and lack a consistent three-pointer. I wouldn’t disagree with these comps if Jordan shot at their percentages, especially DeRozan’s career sub-30%, but there’s a distinction that has to be made here -- was it that Jordan was a bad shooter or that he didn’t need to shoot because no one could stop his drives, post-ups, or mid-range game? I tend to believe the latter. In his career (not counting the infamous Wizards comeback), MJ averaged 1.8 three-point attempts out of 23.3 field goal attempts per game. That’s 7.7% of his shots coming from three. Superstar guards today range from averaging 1/3 to 1/2 of their attempts coming from behind the line, that’s just the way the league is right now. In his career, MJ averaged over three, three-point attempts per game only thrice: in ‘89-’90, ‘95-’96, and ‘96-’97. And in those seasons, he shot the three at 37.6%, 42.7%, and 37.4%. The question isn’t “was Jordan a bad shooter?”, it’s “How well would he have shot if he took five, six, seven threes a game?” Would those numbers hold up or would he regress back to his 32.7% career average?

I’m not a psychic, so I can’t answer that question. But what I do know, is that if he played today, he’d be shooting the three more frequently than at any point in his career. But to be honest, I’m not convinced he’d even need that great of a jumper to be elite today. One on one, no one would be able to guard him -- no one. Not prime LeBron, not Paul George, not Tony Allen, Andre Iguodala, Pat Beverly, CP3, or even Kawhi. Jordan put up 37 points per game without hand-checking rules and without a jumpshot in his day… in today’s league, where you can’t breathe on a ball handler or shooter without drawing a whistle, he’d be breaking free throw records and putting anyone who guards him in foul trouble every night.

And the spread sets today would open up the floor for him and give him all the more room to iso and take the ball to the rim. If he played alongside four shooters, a la LeBron’s Cavs or Giannis’ Bucks, he could run the point and just iso the ball, drive, and kick out to the open shooter if help comes. Jordan was a way better passer than he gets credit for and when he ran point for the Bulls in ‘88-’89, he averaged 8 assists per game, so I don’t buy the notion that he’d be too hard-headed or stubborn to move the ball around in double-team situations.

I think we’d see a lot of Harden-like isos from Jordan (minus the stepback threes), where instead of calling for a pick, and giving the defense an opportunity to trap on the action, Jordan would be better off dribbling out some of the shot clock and making his move on his defender one-one-one. The other four guys could stand as far away from the basket as possible, making help defense that much more difficult. It think that would be Jordan’s best bet, as calling for screens may actually cause some issues.

In today’s pick and roll league, most defenses choose to switch assignments on screens, for a number of reasons. For one, it’s easier; having to go over or under screens is more physically demanding and having to make the decision to go over or under depending on the matchup, presents more opportunity for mistakes -- the more you switch, the less you have to consciously think about what to do when the screen comes. Second, if you go over screens, guys like Harden, Curry, Durant, and Chris Paul will bump into you, flop, and end up at the line shooting free throws. Switching helps prevent this, as the player getting picked can sit back and let the screener’s man, who’s in better position, take over the assignment. And if you have defenders who can guard multiple positions, like last year’s Canadian champs, switching can nullify a strong pick and roll game, as you’re able to beat the offense to their spots. In Jordan’s case, if he ran into a switchable defense, his lack of a jumper could get him into trouble, as the defenders could sit back on switches to take away the drive and force the jumpshot. Again, the simple solution to counteract this would be to just not call for screens. If no one could guard MJ one-on one, like no one can guard Harden one-on-one, there’s little need to call for a pick to force a mismatch. Jordan could just iso his man to death and tell everyone else to get the fuck outta the way and there’s not much the defense could do to stop him.

To me, the most successful version of Jordan in today’s league, offensively, would spend most of his time as the primary ball handler, likely playing the point guard position like he did back in ‘88-’89. This would prevent teams from ball-denial defense and would allow him to dictate the offense and flow of the game. If he likes his matchup, he can just iso his man and rely on his athleticism to get to the rim and, hopefully, beat the help defense. And on possessions where he starts off-ball, the offense could clear out and let him post his man down low. There, he’d be pretty much unguardable, as there isn’t a wing in the league that could stop that fadeaway jumper off the block. Think Kawhi or LeBron-level post ups.

Defensively, there’s not a whole lot to discuss -- he’d be elite. He’d be up there with Kawhi and Draymond as a DPOY frontrunner every year. His huge hands, quick feet, and elite court awareness would allow him to shut down any guard in the league, and he’d fare well against some of the smaller small forwards as well. The big LeBrons, Paul Georges, and Greek Freaks of the league would be tough for him, as he was only 6’5”/190lbs, but there wouldn’t be any glaring mismatches out on the wing for him. He would have to learn how to guard without hand checking, but again, given his physical tools and basketball IQ, I don’t see why he wouldn’t be able to adjust.

For any superstar athlete, success is fostered by environment. In the NBA, championships are right place at the right time for superstars. Look at Tim Duncan. Led by the greatest coach ever, Gregg Popovich, and surrounded by selfless, team-oriented winners, who all contributed to his five championship wins across 16 seasons. LeBron, same thing. His free agency hit the same time as BFF Dwyane Wade and superstar Chris Bosh’s and they teamed up to win two rings in four seasons in Miami. Then, he signed back with Cleveland, who put together the ideal roster around him that made four straight finals with one win over one of the greatest teams of all time. And the same would go for MJ if he played today. Put him in the LeBron/Giannis role and surround him with four shooters who can stretch the floor and he can be the best player on a championship team. Surround him with other iso players and guys who can’t shoot, and you have clogged lanes and a stagnant offense in a league where defenses are smarter than ever. One thing I know for certain though, is that no one wanted to win as badly as Jordan did and I don’t know if anyone ever will. And that one-of-a-kind will, that need to win, could be all it takes to go six-for-six in the Finals in any era.

How Would MJ Fare in Today's League? 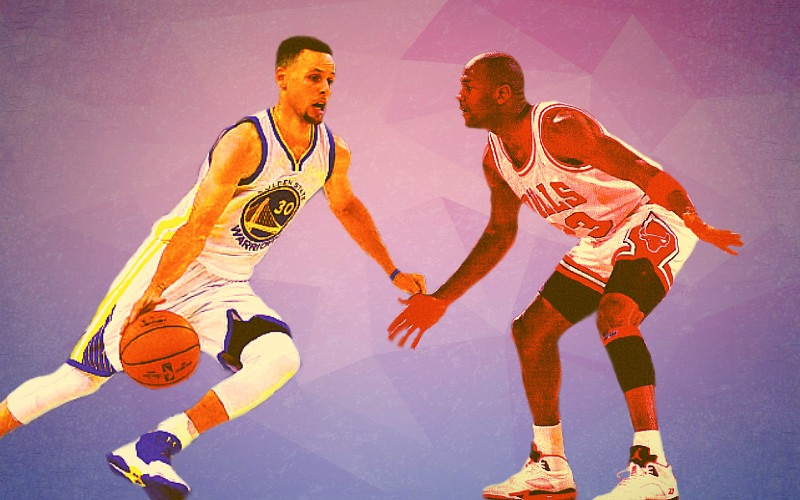