The rotating-doors Sixers have yet another new look this year. Jimmy Butler’s out and Al Horford and Josh Richardson are in. They may be the most polarizing team in the league -- some think Simmons and Embiid are ring-bound, ready to make the leap to superstardom, others think the pairing is a stylistic nightmare. Either way, Brett Brown’s Sixers will have to reinvent themselves once more to climb atop the Eastern Conference and put themselves in position to take home gold in this wide-open NBA.

Without Butler, Brett Brown is gonna have to make some tough calls, especially come playoff time. They’ll be good enough in the weakened East to get 48-53 wins with their current roster, but Brown’s halfcourt offense could struggle to put up points and close out games in the slower pace of the playoffs. When your best scorer is a big center, end of game possessions become incredibly difficult, as the offense becomes predictable and slow... and with Embiid being the only player on the roster who averaged over 20 points a night last year, the Sixers will look to Harris, Simmons, and Richardson for complementary scoring and one of them will have to step into the closer-role that Butler took with him to Miami.

And if the Sixers really want to compete for a ring this season, Simmons is gonna have to be that guy. And really, he’ll be the key to their entire offense this year… if he can develop even a Giannis-like below-average jumper, he’ll completely transform the stagnant, crowded Sixers half-court offense into a versatile and dangerous one. If he can at least hit the mid-range, it’ll give Embiid and Horford more room to operate down low and would make defenses think twice about bringing double teams to the post. It would allow the Sixers to play slower, which would play more to the strengths of Embiid, Tobias, and Horford. As it stands now, Simmons is an elite transition player, almost impossible to guard given his size, strength, and speed… but his lack of a jumper makes his halfcourt game so predictable, especially noticeable in the playoffs, when teams really sell out in trying to take away his driving lanes.

And Simmons’ level of willingness to shoot will affect the entire offensive ecosystem -- If he can’t or won’t shoot, Brown won’t be able to run the high-elbow Horford actions, where he meticulously threads the needle to slashing guards to the rim, because the lanes will be too clogged. Simmons’ defenders will just sag way off him, preventing him from beating his man to the rim off of an easy Horford dime. Horford would essentially be relegated to a strict stretch-four role, where he’ll just run pick and fades and camp out in the corner for kickout threes. He’s good enough to be effective there, but the Sixers would be missing out on the other things he can offer offensively.

Game pace would also be perpetually in question, as Brown would have to decide between pushing breaks more, to play to Simmons’ strengths (and away from his weaknesses), and slowing the game down to post Embiid or Horford up in the halfcourt. I think we’ll see a Budenholzer/Bucks-esque offense this year, where Simmons will be the primary ball handler in both fast breaks and halfcourt sets, and just spread the rest of the floor out. That’s their best bet, as it’ll give Simmons enough room to operate and kick out to a shooter when help defense comes. But while this will probably be their most effective strategy, I'm not sold on its potency. The reason it works for the Bucks is because Giannis is 6’11” and can eurostep around and over anyone in the league and is surrounded by guys who shoot without hesitation and at high percentages. Simmons is a huge guard and can get to the rim, but he isn’t quite the same, physically, as Giannis -- he doesn’t quite have his height or wingspan and it isn’t as effortless for him to throw down a reactive dunk. And he’s not surrounded by guys who are born shooters, whose role is to just shoot as many threes as possible, either. Richardson and Harris shoot at around league-average, about 36%, which is fine, but Horford and Embiid are no Mirotic or Lopez when it comes to shooting. Horford shoots above league average percentages, but isn’t a volume shooter -- he’s like a Marc Gasol, who willingly passes up open threes to try to swing the ball to a perceived better option. He also has a slow release, and if he’s relegated to a stretch-four role, defenders will be more up in his grill, giving him less room to shoot and as a result, less open looks. And while Embiid is a more willing outside shooter, teams will happily let him chuck all day, as he only hits around 30%.

Bottom line, offensively; if Simmons doesn’t start showing improvement from the line and show that he’s willing to shoot, the Sixers’ offense will never truly flourish, and that max contract extension Elton Brand gave him this summer might not age well.

But what the franchise will certainly appreciate are the Al Horford and Josh Richardson signings this summer. Horford is the most versatile big in the league, on both sides of the ball. He can stretch the floor, post up, find slashers, and play in any offensive system Brett Brown runs. Defensively, he’s a big-man lock but also quick and agile enough to safely switch onto guards out on the perimeter, allowing Brown to run a switch-style defense with plenty of size and length. He’s also the only dude in the league, besides Marc Gasol, who can consistently lock up Embiid one-on-one -- taking him out of that equation by placing him next to Embiid rather than against him is a win-win for Philly.

Richardson is really starting to come into his own and develop into a solid 3 and D wing, who should complement the play styles of Embiid, Simmons, and Harris nicely. He doesn’t need the ball in his hands and can run plenty of off-ball actions, should be able to play kind of a hybrid Butler/Reddick/Covington role for them this year. Simmons can kick out to him on drives, same for Embiid on posts, and Horford can find him cutting backdoor for some easy layups and alley-oops. You can also stick him on the tougher wing matchups to keep Simmons out of foul trouble, which will especially come in handy come playoff time, when Brown will want to play Simmons as much as possible.

And speaking of defense, on paper, this Sixers squad should be the toughest team to score on by far this year -- Simmons, Richardson, Harris, Horford, Embiid… not only is that team huge, but they’re all smart, tough, hard-nosed defenders who can just beat up the other teams for 48 minutes a night. They can confidently switch almost every screen, and use their length to contest every shot and pass their opposition attempts. The only matchup they’ll actively avoid is Embiid switches onto smaller guards, but they can just go over those screens as they have enough length and quickness to be able to recover once the guard turns the corner. They’ll be holding their opponents to sub-100 point games a lot this year, and should rank as the number one defense… I mean, they have two All-Defensive players in Horford and Embiid, and adding a 6’9” point guard, who defended Kawhi about as good as humanly possible in the Eastern Semis last year, is almost unfair. Think ‘04 Pistons, but with more switching.

Losing their best closer, in Jimmy Butler, is gonna hurt Philly in the Playoffs this year, no question. Brett Brown still has to figure out this rotating doors of an offense and if he wants to remain in Philly, he’ll have to do it fast because we’re quickly approaching now or never territory for this team. With Kawhi now out West, the road to the Finals is smoother, less bumpy than ever before for this Sixers team, and they’ll look to show the league that Hinkie’s vision is their destiny. This is the season for the Sixers, their most pivotal one in years -- will they go and grab what’s theirs or fall by the wayside? To me, that question is answered by another: can Ben Simmons shoot? 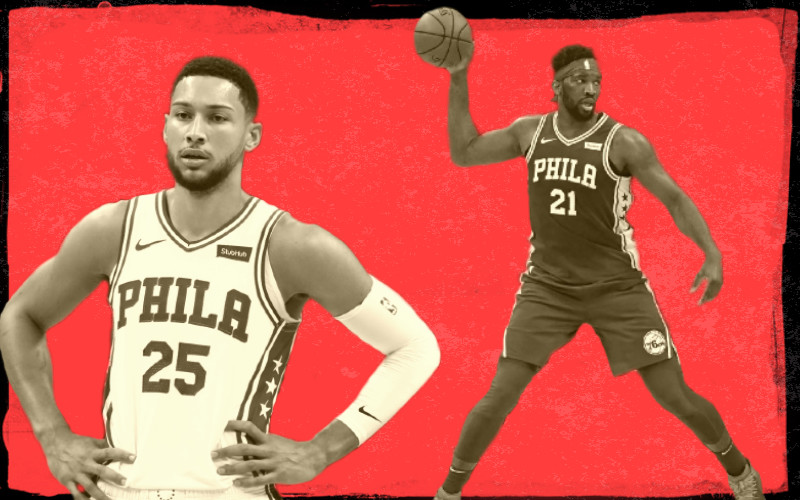