Next stop on the NBA off-season train is the Summer League, where young prospects and NBA hopefuls get a chance to impress their teams and scouts heading into the 2019-20 regular season. This year’s headliners, Zion Williamson and RJ Barrett, former Duke teammates (and roommates), will make their pro debuts against one another in what could be the most anticipated Summer League matchup ever. So let’s get ready to overreact to good and bad performances alike and look ahead to the five most interesting players heading into the 2019 Summer League.

It’s official. Zion is a Pelican and will be making his NBA debut in the Summer League this July. It might be the most anticipated Summer League debut ever and fans and front offices are itching to see Zion play in a Pelicans jersey.

Now, everyone knows how great Zion was at Duke and how his size, strength, and athleticism should translate perfectly to the NBA. So instead of gushing about how Zion should have no problem dominating the Summer League, let’s play devil’s advocate and look at how he might struggle in his first action against the pros.

At 6’7, 285lbs, Zion will excel in transition, no question, but in the halfcourt, we could see some awkwardness. If defenses are smart, they’ll play way off him to help on the drive and force a jumpshot or kickout. And if defenses can do this successfully, we could see some early-career Giannis-like struggle, with a lot of dribbling into double teams and trying too hard to make something happen himself.

Zion’s height could also be a problem against NBA length, especially on post ups and drives. At Duke, he played bully-ball down low and used his strength to fend off defenders with his off hand out on the wing. But NBA defenders are longer, stronger, and smarter and there will undoubtedly be an adjustment period, where Zion will look awkward and out of control. I expect to see plenty of turnovers this summer, until he gets accustomed to NBA game-speed.

Defensively, I’ll be interested to see where he’ll be matched up at. If Jaxson Hayes is on the floor, Zion will be guarding fours but if the Pels experiment with some small-ball lineups and play Zion at the five, he’ll have to guard the five as well. And if the other team stays big, Zion will be giving up some serious height down low and could struggle to protect the rim.

All this said, I do expect him to put up some lofty numbers and impress in Vegas this summer. These concerns will likely surface more in the regular season, where he’ll be playing against NBA starters, but he’ll have a solid coach and a full season to address any issues that do arise.

This has been the summer from hell for the Knicks. They shared the highest lottery odds to land the top pick and take Zion. Instead, they fell to third and drafted the consolation prize in RJ Barrett. They hoped to get at least one superstar in free agency this summer in KD, Kyrie, and/or Kawhi. Instead, KD and Kyrie signed with Brooklyn, Kawhi is likely staying put in Toronto, and they, instead, signed Julius Randle, Elfrid Payton, and Taj Gibson… not exactly the big three they were banking on.

So RJ will be given the keys to the franchise for now, and will look to impress in Las Vegas in his first look against pro-level competition. Unlike Porzingis and Knox, relative unknowns who got booed by Radio City on draft night, RJ came into the draft with Duke prestige and extensive national exposure, as someone with star potential who could make an immediate impact for whoever drafted him. And after whiffing in free agency and losing the draft lottery, Knicks fans will be throwing all of whatever little faith they have left into RJ and pray that he develops into a franchise player who takes them to the promised land. That may be far fetched, considering RJ wasn’t even the best player at Duke, but Knicks fans don’t really have anything else going for them.

So this year, RJ will be under more pressure than any Knick rookie since Ewing back in 1985. More than Porzingis, more than Knox and Ntilikina, or any other Knick rookie over the last 34 years. RJ is the highest draft pick the Knicks have had since Ewing and fans will expect him to perform like a third overall pick right from the start. I don’t know if RJ is a true third overall pick, as he played on the best team alongside Zion Williamson in a weak draft class, but I do think he’s willing to prove otherwise. Every interview I’ve seen of his impresses me… he looks poised, says the right things, just looks comfortable in the spotlight. I don’t get the impression that playing under the New York microscope will phase him all that much. He seems like a kid who’s itching to prove himself and just go out and play ball.

He’s actually my pre-season pick for Summer League MVP, over Zion. I think he’s gonna come out aggressive on both sides of the ball and his skillset and physicality should translate perfectly to the Summer League. The smaller Summer League guards won’t be able to stay in front of the 6’7”, 200lb RJ and he’s smart enough to exploit that and relentlessly attack the rim. Defensively, his length will allow him to contest shots and break up passing lanes and I think we’ll be seeing a few one-man fast breaks coming off of steals. Knicks fans have every reason to be depressed but RJ will be a silver lining in this seemingly infinite arduous life in purgatory.

MPJ will be making his long-awaited NBA debut this summer after red-shirting his rookie year and missing all but three of his collegiate games at Missouri the year prior. The former number two high school prospect has finally recovered from back surgery back in 2018 and will get his first look against the pros this summer.

If the Nuggets want to make the leap from decent playoff team to legitimate contender, they’ll need to add another piece alongside Jokic and Murray. Millsap is 34 and only has another year or so left of solid productivity. So Malone and the Nuggs will be keeping a close eye on Porter Jr’s development in hopes he can grow into a third scoring option and eventually step in and replace Millsap when that time comes.

All the physical tools and skills are there… 6’11, with a 7’0” wingspan, athletic, can shoot and defend. He should be able to carve out a solid role in the league and help the Nuggets make a deep playoff run, but he’ll have to stay healthy to do so. And there are growing concerns around the league that he might never be able to play an 82-game season without minutes restrictions, so the Nuggets will have to monitor his progress delicately.

But this summer, Porter Jr. will look to display his game to the NBA for the first time. I have no idea how he’ll look or how his career will pan out, but damn I’m excited to watch him play. He’ll be rusty no doubt, and will probably look lost and passive his first few games, but over the course of the summer and into his rookie season, he should start to feel more confident in his body and remind us why he was such an intriguing prospect coming out of high school.

The competition step-up will be drastic for every rookie playing in the Summer League, but for Sekou, it’ll be like playing a new sport. The 18 year old Guinean played for Limoges CSP of the LNB Pro A French league last year, where he averaged a modest 6.9 PPG, 2.8 RPG, and 0.6 APG on 55/25/63 shooting splits in 15 minutes of play. He’ll go from playing in front of hundreds, in France, to millions, in the US. And being so young and inexperienced, I expect to see plenty of tentativeness and awkwardness at first. He wasn’t blowing anyone away with athleticism in France and his shooting and playmaking left much to be desired, too, so I look at Sekou as more of a project player. But the Summer League is the perfect platform to get plenty of reps against better players before throwing him to the wolves against real NBA rosters.

A successful Summer League for Sekou would be one where he plays without fear and with plenty of aggressiveness. He’s gonna get caught in double teams and turn the ball over. He’ll throw up some bad shots, maybe some air balls. But the key for him will be to just go out and play, not worry about his numbers or highlight reels. It’s not like he’ll be playing for ROY this year anyways… Dwayne Casey will likely ease him into the season on limited minutes against bench units, so the main focus this summer will be for him to get reps and refine his skills.

If he can increase his comfort-level and improve some on some fundamentals, we should be seeing these kind of performances in no time:

After a weird first season, which began with a promising Summer League debut followed by a historically underwhelming rookie campaign, Knox will have to put the past behind him and look to wow the Knicks in his upcoming, pivotal sophomore season. He won’t have the luxury of a ‘sophomore slump’ and will have to make a big leap in production across the board to prove to the Knicks he can be a centerpiece moving forward.

But this summer, he won’t be the center of attention in New York, as RJ Barrett will be drawing most of the spotlight. Scouts and fans are more interested in the unknown and after his disappointing rookie year, many feel like they already know who Knox is as a player… but this might work in his favor. With all eyes on RJ, Knox should be able to relax a bit and let the game come to him instead of trying to force the issue so much. Last year, he was stuck in tunnel vision most of the time… he missed wide open teammates on drives, forced contested layups and jumpshots, and would get lost defensively. Tunnel vision is just a result of nerves and overthinking so if Knox can learn to settle down, he’ll make smarter and more creative decisions on the court.

The addition of RJ should spark some friendly competition as well. They won’t be competing for each others’ position or playing time, but they will be competing for recognition. And that should be enough to light a fire under Knox’s ass and push him to challenge himself mentally and physically and leave it all out on the court. He has to play like he’s got something to prove, which he does.

The Knicks will be taking on Zion and the Pelicans in their Vegas debut and the RJ/Zion matchup is one to salivate over. But I’ll also be looking to see how Knox responds. Depending on the rotations, he might even have some matchup time with Zion, which would be a huge opportunity to prove himself against the next projected NBA great. 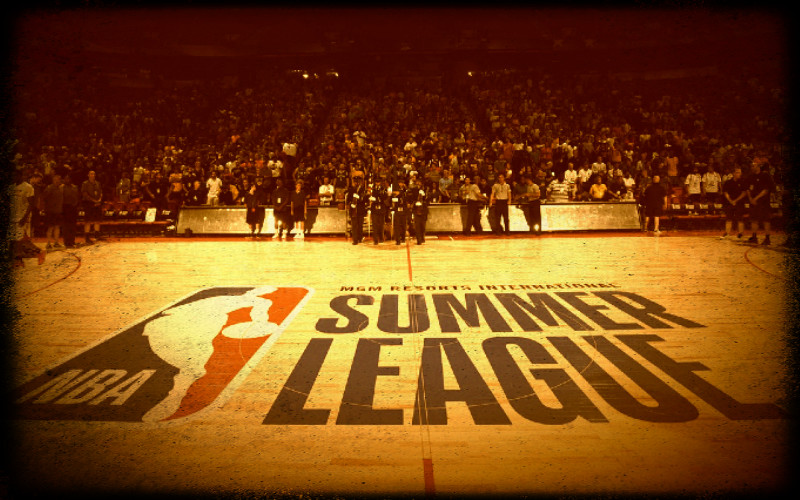