The 2019 NBA Draft has now come and gone. Zion is officially a Pelican, and the Suns continue to shoot themselves in the foot. Here’s our draft-day grades for each team in the league:

Hiring David Griffin was the best move the Pels’ front office has made since drafting AD back in 2013. He turned the disgruntled Davis into Lonzo Ball, Brandon Ingram, Josh Hart, Jaxson Hayes, Nickeil Alexander-Walker, and Marcos Louzada Silva and future picks. Place those guys around Zion and Jrue and that’s a superteam waiting to blossom. I can’t wait to watch this team next year, hats off to Griffin.

The Grizz successfully filled their roster holes and drafted the BPA with both of their selections this year. Ja, JJJ, and Brandon Clark should be a nasty trio and the Conley trade netted them a couple of seasoned vets in Korver and Crowder, who will round the team out nicely. They won’t be a playoff team next season, but their roster is more interesting to me than a Sacramento or Minnesota and I’ll be curious to se who they target in free agency this summer.

Atlanta traded two firsts to move up and take the best 3 and D guy in the draft, De’Andre Hunter, the perfect wing pairing with Trae Young. They also took a flyer on Cam Reddish, who fell in their laps at number ten. He’s inconsistent, no doubt, but his upside potential makes him a must-draft at that ten spot. Bruno’s also a good pick at 34, a big man with a good inside game and improving outside jumper. The Trae, De’Andre, Cam, Collins, Bruno core is one the Hawks can feel confident developing and building around.

The Knicks received several offers for the three spot and passed on them all. They didn’t overthink the pick and stayed focused on drafting the BPA, something they would have surely done in years past. RJ Barrett has star potential and it doesn’t look like they’ll get a superstar in free agency this year, so drafting RJ and essentially giving him the keys to the franchise was the next best move for the Knicks.

I have my concerns about Sekou, but at the 15th spot you have to take him. Best case, he’s a Siakam, who can fit into any roster in the league. Mid to late first round picks are all about swinging for the fences, especially in a draft this thin, so the Sekou pick was a no-brainer.

I’m not completely sold on Little as an NBA wing, but I do think he’s a great selection at 25. Kevin Porter may have been the more interesting pick, but Little’s defensive promise should fit well alongside Lillard and CJ.

Kabengele and Claxton could be steals at 27 and 31, though Brooklyn now has too many young bigs with Allen already starting for them. But Atkinson can just go with whoever pans out the best and move on from the other two.

I knew Bol Bol would slip but not that far. Couldn’t help but feel bad for the kid, sitting in the green room by himself as the picks kept rolling in and passing him by. I think at 44 you have to take a chance on Bol even if his health is a (major) concern.

I don’t know how good these picks actually are but it’s the Spurs so I’m just giving them a B.

I like that the Cavs took the BPA at 5 in Garland and didn’t overthink the selection. Sexton hasn’t proven he’s the guy yet and in today’s positionless league, it’s not impossible to play two “point” guards together successfully. I also like the Kevin Porter Jr pick at 30 a lot. He’s kind of like Cam Reddish in that he’s intriguing for his upside potential... and they didn’t have to reach for him either.

May have reached a bit on their Herro pick, but I really like KZ at 32. He has a lot of potential with his size and length and could be an interesting project player for Spoelstra.

Pretty straight-forward selections from Minny, but they duped the Suns into the pick swap/Saric deal, so I think they did alright.

I’m intrigued by Horton-Tucker, seems like he could be a decent pick at 46. Has the tools to be a switchable defender and at least league-average three point shooter.

I’m not as high on the Poole pick as others seem to be. To me, he’s like a poor-man’s Nick Young, who didn’t really work out for Golden State a couple years back. I don’t see him as anything more than a benchwarmer for a few years before he ends up in the G League or overseas. Paschall seems interesting tho, and I think the Dubs got him for decent value at 41.


Pretty uneventful considering Woj reported they were looking to either move up or make a significant draft night trade. Langford’s a wing who shot the three ball at 27% last year… who knows if the others will pan out...

Philly traded most of their picks away, as they’re trying to hold on to as much cap space as possible. They did hold onto their 20th selection, Matisse Thybulle, who might be the best wing defender in the draft, though he’s very limited offensively… reminds me of a Roberson or Tony Allen.

Classic, safe Wizards draft. Rui isn’t a bad pick but his ceiling is relatively low, will probably end up an 18-minutes-a-night guy coming off the bench. At 9, you have to start taking flyers, especially in a top-heavy draft like this one. Cam Reddish would have been the more intriguing pick and they could have probably traded down a few spots and still got Rui, too.

Really don’t get this one… they already have Turner and Sabonis, not sure what adding another stiff big does for them. They’re apparently targeting Rubio in free agency so it’s understandable they didn’t try to trade up for a guard, but Brandon Clarke and Nassir Little were still on the board at 18, both of which would have been better roster fits than Bitadze.

Tanked all year for Saric and Cam Johnson… 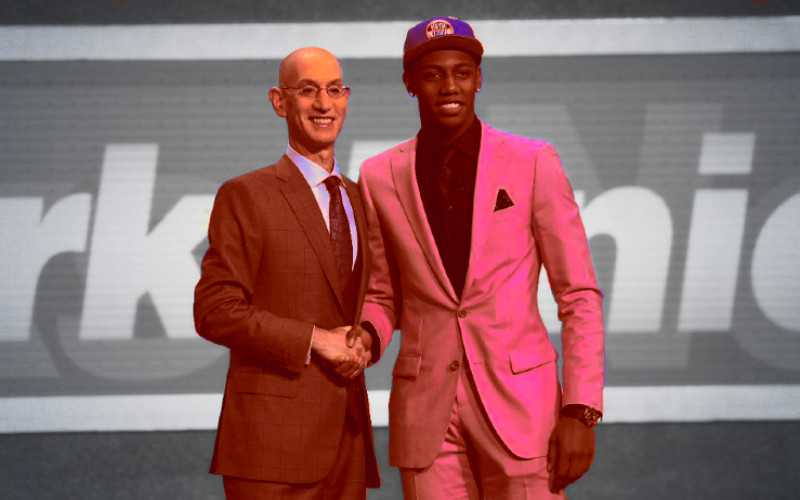