The Warriors have been rolling without KD in the playoffs this year, winning 5 (and a half) straight games since he went down with a calf injury, including a WCF sweep of the Blazers. This has opened the floodgates for hot-takes about how the Warriors might actually be better without Durant in the long run. And while these takes are interesting, I did want to do some research myself to see if there’s any truth there or if it’s just a great opportunity for sarcastic SpongeBob.

Cherry-picked stats are kind of the bane of my existence and you see this in basketball constantly. Every time you turn on ESPN you’ll hear something like “Player X is the first player to average 21/4/7 since Player Y in 1984”... or “No team has won X games in a row followed by at least Y losses in a row since Team Z in 1967”... just super uninsightful and really trivializes stats in general.

So with all this talk about how “the Warriors might actually be better without Durant,” I wanted to take a deeper look into the numbers to see if the claim is legitimate or just a bunch of cherry-picked bullshit.

So just based on whether or not Durant plays, the Warriors win percentage doesn’t seem to be affected much. And because the 38 games without Durant is a relatively small sample size, I ran the opponent win percentage as well, which comes out to 0.484… just under league average.

If we dive a little deeper into the games that Durant didn’t suit up for, we see that of those 38 games, Curry played in 31 and missed the remaining 7. Here’s the win/loss numbers for these games:

These numbers indicate that in Durant’s DNPs, the determining factor on wins/losses is whether Steph plays or not… when he does, they win at an 87% rate, which would equate to a ~71 win season... (🤔🤔)

When both stars are out, the Warriors suck and have only gone 1-6, which would equate to a ~12 win season (obviously a very small sample size, so to be taken with many grains of salt).

So based on the regular season win/loss numbers, when Durant plays, the Dubs are a ~61 win team, when he doesn’t, they’re a ~60 win team, and when Steph plays and Durant doesn't, they’re a ~71 win team. So yes, these numbers would suggest that the Warriors are better in the regular season without Durant and with Steph. But let’s see if this holds true in the playoffs as well:

Here, we see more of the same; when Durant doesn't play, the Warriors haven’t lost, going a perfect 7 for 7 (small sample size). And when he does play, they’ve gone 37-10.

Next, let’s look at the Warriors’ Finals record with and without Durant. Because Durant hasn’t missed any Finals games since joining the Dubs (not yet, at least), we’ll have to look at the two Finals series prior to Durant joining for the “Finals without Durant” analysis:

So before Durant signed, the Warriors went 7-6 in the Finals, splitting 1-1 with the Cavs, and have only given up 1 Finals game since KD joined.

And to give these numbers some context, here are Curry’s regular season and playoff numbers since the Dubs’ first championship run back in 2015:

So if we just look at the overall win/loss numbers when Durant does vs. doesn’t play, you could come to the conclusion that, yes, because the Warriors have a better record without him, that means they’re a better team without him too. And the numbers that really back this argument are the “Curry plays, Durant doesn’t” numbers, where the Warriors have gone 27-4 in the regular season and 7-0 in the playoffs.

But these numbers are misleading for a few reasons. For one, the Warriors didn’t go out and sign Durant for regular season wins, or even playoff wins against teams they already had no trouble beating (*cough* Blazers *cough*). After splitting Finals appearances with LeBron 1-1, the Dubs needed to solidify their dynasty claim with more rings. The 73-9 2015-16 Warriors were, by the record, the greatest regular season team ever… but they blew a 3-1 Finals lead against LeBron, Kyrie, and Kevin Love. When Draymond got suspended in game 5 of those Finals, the Cavs pounced and the Warriors folded. They just didn’t have enough firepower and couldn't match up with Cleveland’s physicality and aggressiveness.

So when looking at win/loss records, the success rate in the Finals should hold much higher weight than regular season or even early-round playoff games. And the 8-1 Finals record and 2-0 series record compared to the 1-1 split and overall Finals record of 7-6 before KD joined, are far more telling than any regular season win/loss analysis.

And diving even deeper into the individual numbers only further reinforces this notion. Comparing KD and Steph’s regular season and playoff counting stats yields similar findings; both guys shoot and score more in the playoffs, with little variance to percentages and other categories. But comparing the advanced stats reveals something different… While both guys’ usage rates remain relatively constant from regular season to playoffs, Durant’s offensive rating per 100 possessions, win shares per 48 minutes, and box plus minus are all slightly up in the playoffs, whereas Steph’s are all slightly down. Meaning, Durant becomes a little more efficient in the playoffs and Curry a little less so. And despite a relatively low variance on these numbers, I do think there’s a lot to be said about a guy whose numbers get slightly better under more pressure vs. a guy whose numbers get slightly worse under more pressure… especially when you remember the Curry-led Warriors choked on the biggest stage, with the highest stakes, forfeiting a 3-1 Finals lead for the first time in NBA history, back in 2016.

But KD isn’t just valuable to the Warriors because he scores a lot of points or has the “clutch gene”. When he’s on the floor, he commands so much defensive attention and adds yet another deadly layer to the Warriors’ already deadly offense to the point where it’s almost unfair… if you sell out on any of Steph, Klay, or KD, the other two will feast. So while guys are chasing Curry and Klay around on screens, it frees up more room for Durant, who can then iso and drive, post, shoot, kickout, or really do whatever the hell he wants. With KD, the Warriors just feel… unbeatable.

Even in last year’s Western Conference Finals, where the Warriors faced a 3-2 series deficit against the offensive juggernaut Rockets, the series never felt completely out of reach. I know that sounds like some revisionist bullshit, but as a team loaded with 4 future Hall of Famers, the thought of not at least making the Finals seemed impossible. And in games 6 and 7, the Warriors flipped the switch and didn’t lose another game that season. And yes, the Rockets’ infamous record-breaking 27-consecutive missed threes in game 7 played a big hand in all of this, but at the same time, you can’t overlook Klay’s monster game 6 and Durant’s dagger game 7 to pull off the series comeback.

But the point is, the Warriors ultimately had too much talent for the Rockets to overcome and close the series out. And that’s really the biggest point in all of this. Curry, Klay, Draymond, and Iggy were talented enough to get to the Finals and even upset the King and take home a ring, without KD. And with him, there’s such an aura of invincibility and self-assured confidence surrounding the franchise that any given game feels like an automatic W. And how do you gameplan against a team with 3 of the greatest scorers ever, in Durant, Curry, and Klay, and 2 all-time great defenders, in Draymond and Iguodala, for an entire series? Curry has an off night? Ok, Durant and Klay can take over. Klay can’t buy a bucket? Ok, Curry and Durant can run the offense until Klay finds the range again. And if all three of those guys are on, there’s nothing any current team can do to defend against all the possible permutations of that offense.

So to me, if you’re looking at the total win/loss records with and without KD and concluding that because the Warriors have a better all-time record when Curry plays and Durant doesn’t, you’re missing the point. The Warriors don’t give a shit about regular season records anymore, especially after their 73-9 season ended in such heartbreak. They want to cement their legacy by winning as many rings as possible while their core is still in their primes and under contract. And Durant helped them dominate the team they blew a 3-1 series lead to, and push the Dubs over the edge from championship contenders to an all-time great dynasty.

So with that, these 2019 Finals will be very interesting on a few levels. With Durant’s health still up in the air, the Warriors may have to take on the Raptors without him and the Raptors are no pushover. They just grinded out two impressive series wins over Embiid’s Sixers and Giannis’ Bucks and seem like a team that could cause some matchup problems for the Durant-less Dubs. And if Durant doesn’t suit up at all, you better believe he’ll (secretly) be pulling for Toronto. If the Dubs do beat the Raptors without him, the “Warriors might be better without KD” takes, which he’s already taken exception to, will only get louder. And as a guy who seems very concerned with his public perception, that could be the tipping point that pushes him to take his talents elsewhere this summer.

If Durant does heal up in time for the Finals and is able to lead his team to another championship, the “Warriors might be better without him” takes certainly won’t go away, but they would at least quiet down for a while. And as they say, winning heals all wounds, and getting that third ring and potentially third Finals MVP trophy could be all it takes to convince KD to stay and help bring a few more banners back to Oracle Arena and put Golden State atop of the “greatest team of all time” list. 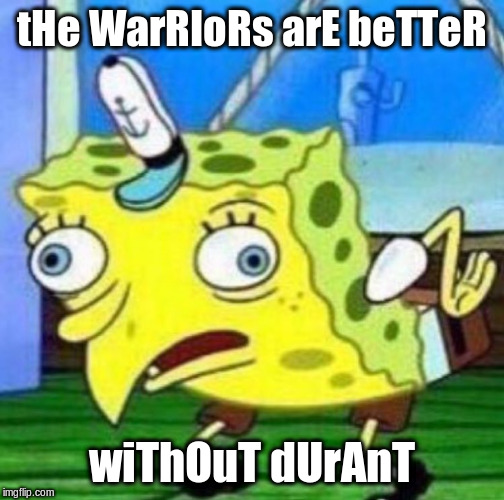 Are the Warriors Really Better Without KD? 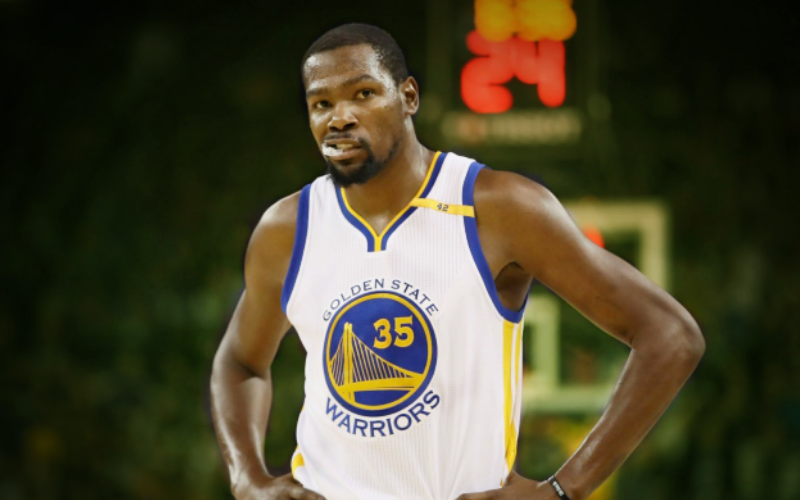