Ok, ok, I know most people don't give a shit about who’s calling the games and I know that I put waaay too much thought into this, but to me, this is serious stuff. I think the broadcast team can really make or break the viewing experience and as NBA fans, I think we’re generally lucky in this regard because most of the broadcast teams are pretty good (much unlike the NFL). Having said that, there are some really obnoxious commentators who can totally kill the game and make me want to mute the TV.

So here’s my ranking of this year’s play-by-play announcers and color commentators, worst to best, for your enjoyment.

Ryan is really the only NBA play-by-play announcer who I’d classify as bad. He just kind of talks really loud at you and never really changes the inflection of his voice. And when he announces a player’s name, like when they’re making a move or taking a shot, he’ll just loudly draw out their name in the form of a question… “HAARDEENNN??”... “DUURRAAANTT??”... “TOWWWWNNS???” once you listen for this, you can’t unhear it, and it’s really fucking annoying.

Dave is the dude with the big schnoz and that’s honestly the most memorable thing about him. I don’t dislike him and I think he calls the game fine, but I’m never like, excited to listen to him for two plus hours. ESPN usually sticks him on the west coast games with Doris, so you really only hear him call Portland and Clippers games.

Ok so if this were like 10 years ago, I’d have Marv at the top of my list, no doubt. But he’s like borderline senile now, and constantly confuses names and just can’t get his voice loud enough anymore. He still has great inflections and a classic sounding voice but he’s just too old and can’t really keep up anymore. The only reason he’s not lower on my list is out of respect, to be completely honest.

Oh and if you haven’t heard him nearly have a stroke every time he tries to say “Antetokounmpo”, give this a watch:

Ok I know I’m in the minority here, but I’m not huge on Mike Breen. He does have some classic catchphrases like “BAAANG!”, which is pretty great, but I think he can over-do it with the forced enthusiasm. I do like him much better on the MSG broadcasts tho, so maybe it’s his partners, Van Gundy and Mark Jackson, who just put a bad taste in my mouth. End of the day, he’s good but I don’t love him.

Mark Jones is the man… he just has that classic voice and perfect inflections on every call. You could also put him in with any color commentator and he’d fit be perfectly fine. He doesn’t try to take over the broadcast and will let the color guy do his thing for the most part. Big fan, and I’d like to see him get more of the primetime games.

This was really hard for me to choose between Harlan and Tirico because I think these guys are the best play-by-play announcers in pro sports. Kevin has a really unique voice with a lot of range but what I like most about him is he’s always really relaxed and can just roll with whatever’s going on around him. The line for a play-by-play announcer to project personality and remain objective is razor thin, but I think Harlan toes that line this better than anyone.

Mike is hands-down the most talented play-by-play guy in any sport. In fact, he calls just about every sport, from basketball to football to golf to tennis… I mean this guy could call a fuckin curling match and I’m sure he’d make it interesting. What’s great about Tirico is that he’s never not in control… he always sounds confident and self-assured yet he gives his color commentator plenty of room to operate, often times asking them for insight into a play or call. He’s just the best and I’ve never once been annoyed by anything he’s said or how he’s called a game, and that’s impressive. Especially considering how judgemental I am.

Ugh. I don’t know why or how this dude is still on the air but good God is he obnoxious. He mumbles and rambles and his catchphrases are cringe level: 1000... “Mama, there goes that man”....... 😑

What’s even more annoying is how he’ll kiss the ass of every referee no matter how shitty a call is because he doesn’t want to shut the door on a potential coaching return. Uuh that’s not happening Mark, because you were bad, remember?

Here’s a great impression of him by some Youtuber… really hits on his painfully long outros going into commercial break:

Reggie is only slightly less annoying than Mark Jackson but not by much. His catchphrases suck too… “Welcome to your Kodak moment”... (😑😑😑😑) and his voice is so annoying to listen to for more than like 30 seconds at a time… I’m not sure who thought it would be a good idea for him to call 2 to 3 hour games but they should seriously be fired.

He also uhh, doesn’t have the greatest command over the English language…

I used to be a big JVG fan, but over the years he’s become really annoying to me. His takes are usually bad and he just comes across as ornery and old. I keep hearing talk that he might get back into coaching, but hearing his takes on the game really makes me question if he still has it. He can be pretty funny at times tho, and he does break up the Mark Jackson rants, which is the only reason I don’t have him lower on this list

Seems like an extremely nice person, but he brings nothing interesting to the table. Just kind of agrees with everything. They should probably just move him to the Players Only team.

Webber falls into the Kevin McHale category for me, as someone who’s just kind of there. He always sounds kind of nervous and never really changes the tone of his voice. He’s definitely on the players’ side when it comes to foul calls, which is refreshing after listening to a lot of the older color commentators, and he can be pretty funny at times as well. But he just doesn’t really add a whole lot for me and he honestly might be another good candidate to be moved to the Players Only team.

Ok now we’re in the “this guy is actually good” territory of color commentators. Hill is articulate and well-spoken and does a good job of speaking from experience and relating that to the game. He really does sound natural and confident on the mic and he never gets in the way of the play-by-play announcer either. He seems like a guy that’s easy to build chemistry with, which means you could put him with a number of play-by-play guys and he’d do just fine. I’d like to see him on more primetime games for sure.

PJ is great and I’m not sure why they don’t put him on more broadcasts. Maybe it’s his raspy voice, but I think it sounds kind of cool to be honest. And he really knows his shit too… he’s kind of like a Hubie-lite, where he really sees the game at a high level and genuinely loves his job. He brings a lot of energy to the broadcast too. You’re never bored when he talks, as he’s always pointing out little things here and there that you’d otherwise have missed or not been privy to. I’d love to see ESPN take him off the radio calls and put him on more TV games.

Smitty!!!! Steve is fuckin great and I genuinely love hearing him call games. He brings a casual element to the game, almost like you’re watching with your fun uncle, only Smitty actually knows what he’s talking about. He’s great on high-energy plays and will sometimes just scream “AAOOHH!!” at a huge dunk or dagger 3. And these reactions aren’t forced either… they’re so natural and visceral, you can’t help but admire the guy’s passion. And I love the “shhkeeeerrrrtt”s he’ll yell when a player gets put on skates (mimicking screeching tires)… I mean there’s no other color guy who would or could do that. I’m praying TNT replaces Reggie or Webber with Smitty next year.

Now I’ll be honest I’ve done a complete 180 on Doris… I used to not like her on the broadcasts very much, but over the years she’s really grown on me and I do think she’s improved a lot since she first started. She knows the game as well as anyone but is also refreshingly human, which is something a lot of commentators have trouble projecting. She’ll empathise with a struggling player or coach and is confident enough to disagree with a bad call or even something a player has done or said. I can’t overstate how refreshing this is to hear, considering most color commentators just pick a side, whether it’s the ref’s, player’s, or coach’s, and vehemently defend it no matter what.

And I think having a female voice on a broadcast provides a great sonic contrast with the more classic, masculine play-by-play voice as well, making Doris’ games really easy to listen to. She’s awesome and would be #1 on my list if it weren’t for my slightly weird obsession with Hubie Brown…

Hubie Brown, aka the GOAT

Ok, now here’s a guy who’s so great, ya don’t even know where ta start. I mean, let’s look at his resume, ok? Because he’s been around the lig for over five decades now, and he’s still going strong at the age of 85. Now, he’s been doing this a long time, there’s no doubt about that, and he’s still at the top of his game. Now you may ask yourself, what makes this guy so great? Well I’ll tell you what makes him so great. Ya see, not only can he give you the stats on any player in the lig, he can also look at any play and tell you what when right versus what went wrong. And I mean, this guy loves every player too. You’ll never hear this guy say a bad word about anyone. He just loves the lig and loves the game of basketball. Now c’mon, how can you not love a guy like that? He’s number one in my books and I gotta be honest with ya, it’s one of my life goals to meet this guy, lemme tell ya. Now that would be something…

In all honesty, every time I see Hubie and Tirico/Jones on the ESPN broadcast, giving their opening thoughts before tip-off, my day is made because even if the game sucks, you know Hubie’s giving it his all from opening tip to final buzzer. I’m on the edge of my seat waiting for the “There ya go!” or “Come on, now!” words of encouragement from him... it’s all so genuine and positive and hilarious all at the same time. And like, I’m not sure this guy has any interests other than basketball either… which is what makes him so great at his job. These are the kinds of conversations I imagine he tries to have with his wife, who at this point, has just accepted the fact that this is all her husband will ever talk about:

I know he’s 85 and father time is undefeated, but he doesn’t seem to be slowing down at all, which is great because I’d love to hear him call games for another 30 years…. And hey, ya never know with modern technology. Long live Hubie. 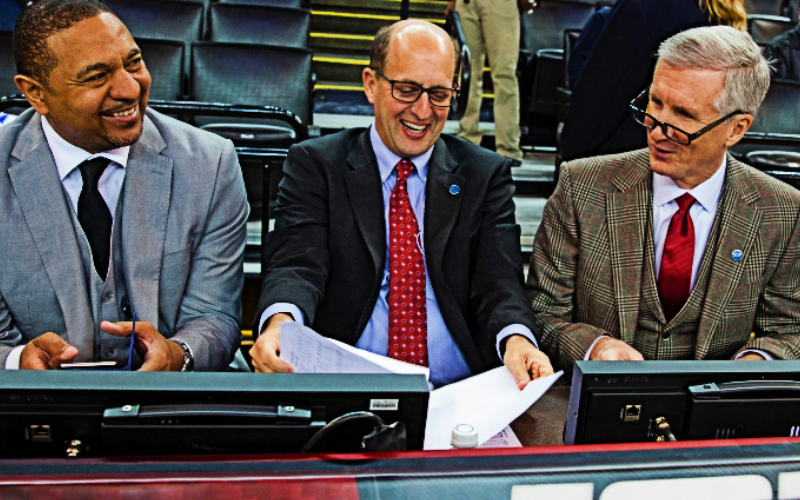